And now for something completely different…

The call for papers has already been open for several months and closes at the end of this week on 20th May. There’s still time to submit an abstract though!

Proposals are invited for short papers (20 minutes) and panel sessions (60 minutes). Abstracts of up to 250 words are invited, and should be sent to maritimemasculinities@gmail.com

The period from 1815 – 1940 saw the demise of the sail ship, and the rise of the machine-driven steam, and then oil-powered ships. It began as a period of both naval and maritime supremacy for Britain, which was subsequently eroded during two world wars. After a century of frequent naval warfare, there was the advent of the Pax Britannica, and the phenomenon of navies which barely fought. Moreover, popular navalism emerged in advertising, pageantry, and popular literature, and was the subject of photography and then film.

Cultural ideals of masculinities also underwent considerable shifts in a period that in civilian life advocated differing styles of manliness including Christian manliness, muscular Christianity, and the domestic man, and in the armed forces deployed tropes of masculinity such as bravery, stoicism, and endurance to the extent that military and maritime models of manliness were held up as aspirational models for all men.

Further information about the Maritime Masculinities 1815 – 1940 Conference is available from the conference blog maritimemasculinities.wordpress.com

Maritime Masculinities is sponsored by Oxford Brookes University, Port Towns & Urban Cultures at the University of Portsmouth,  and the Society for Nautical Research. 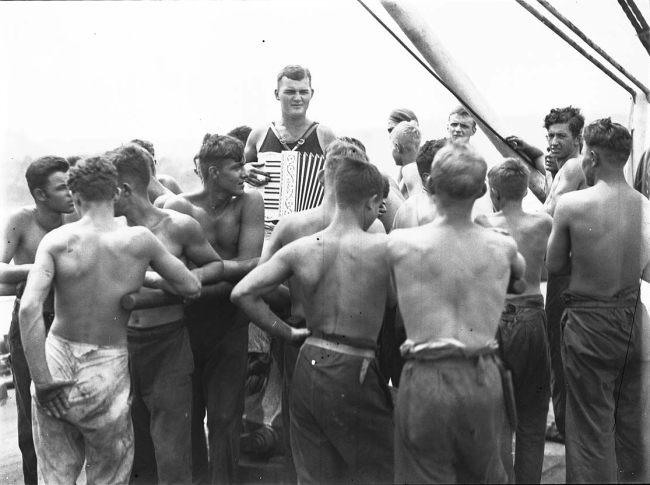 German sailors and an accordion player on board Magdalene Vinnen, March 1933. No known copyright restrictions.

This work is licensed under a Creative Commons Attribution 3.0 Unported License.