Last Friday I went along to the EduWiki Conference in the distractingly beautiful St Leonard’s Hall at the University of Edinburgh. I have to confess to being a bit of a Wikimedia fangirl; I’m not a Wikimedian myself, but I’m a huge fan of Wikimedia’s work in the education domain and I believe Wikimedia has an important role to play, not just in disseminating open educational resources, but also in developing open education practice. This was highlighted by the recent Wikimedia Deutschland OERde14 Conference I went to in Berlin, which brought together over 300* participants from all sectors of German education. This is the first time I’ve managed to get to the EduWiki Conference in the UK and it certainly lived up to expectations.  I’m not going to attempt to summarise the entire conference, but I do want to pick out a few highlights

The Conference was opened by Peter McColl, Rector of the University of Edinburgh and editor of the progressive blog Bright Green. McColl highlighted the venerable tradition of the Commons, describing Wikipedia as a perfect example of the Commons, a resource that we come together to create and which we can all share and use.

By Tflanagan (WMF), CC BY SA

Floor’s presentation provoked an interesting discussion about the potential importance of Wikipedia in engaging the public with research and demonstrating academic impact. Melissa Highton, Director of Learning, Teaching and Web Services at the University of Edinburgh suggested that citing open access articles in Wikipedia should result in increased evidence of impact while at the same time helping to change attitudes to Wikipedia in in academia. Toni Sant, Wikimedia UK Education Organiser, added that Research Councils UK are starting to show an interest in Wikipedia and that EduWiki was mentioned positively at the 6th international Conference on Integrity and Plagiarism earlier this year.

Marc Haynes, Wikipedian in Residence at Coleg Cymraeg, spoke about Welsh Wicipedia and Porth Esboniadur, a reference resource for Coleg Cymraeg Cenedlaethol. Training in wiki skills is provided as an ongoing part of Coleg Cymraeg Cenedlaethol’s academic staffing programme. Marc noted that colleagues are not keen on using CC BY SA licenced content due to the perceived difficulty of mixing it with CC BY content.   This is an issue that Cable Green actually addressed on twitter recently, advising that resources that mix licences should state

Martin Poulter, Jisc’s former Wikimedia Ambassador gave a highly engaging talk about the benefits of “Wikimedia comprehension exercises” to educate colleagues and overcome misconceptions. He then challenged us to locate various tools and useful information, such as quality ratings and translations, around Wikimedia. Even with such a knowledgeable audience, I could hear lots of people commenting, “Ooh! I didn’t know that was there!” 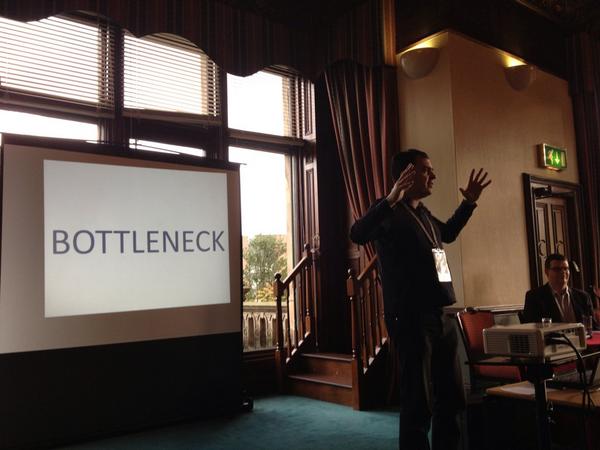 Greg Singh, Lecturer in Communications, Media & Culture at the University of Stirling, also touched on Wikimedia misconceptions, telling us that his students often ask ‘Why doesn’t wikimedia act more like amazon?’ – because it’s not a social media platform and it’s not a bookseller!

Cetis’ Brian Kelly and Filip Maljković of Wikimedia Serbia gave a whistlestop tour of Wikimedia projects in the UK and Serbia which I’m not even going to attempt to summarise, but you can find their slides here.

In the afternoon I went along to the “Wiki*edia Projects in Schools” workshop led by Daria Cybulska and featuring thought provoking contributions from John Johnston, Ian Stuart, Ally Crockford and others. Several themes emerged from the workshop including the use of Wikimedia to enhance digital literacy, the possibility of working with Gaelic medium educators to develop Gaelic wikipedia entries for use by teachers and the pros and cons of integrating wikipedia resources with lesson plans. The discussion also drifted into GLAM territory, with several participants mentioning teachers’ fear that they will be caught using licensed content. At this point John Johnston suggested that what we really need is a “wee weans licence” i.e. a licence that allowed children to use content in the course of their education without fear of copyright infringement.  John also advised that we shouldn’t be too ambitious when introducing Wikimedia in schools. Don’t dive straight into editing, start off by demonstrating how to use Wikipedia as a source and how to reuse content with appropriate attribution. Iain also suggested that making Wikipedia available in a closed environment, such as a usb stick or a closed network, might encourage its use in schools. Sadly I had to leave before the workshop ended, but I left participants cheerfully discussing how to harness the power of “love and happiness and guilt-tripping” to promote use of Wikimedia in schools 🙂

* I’m guessing. I don’t know how many people were actually there but I vaguely remember someone mentioning 300!

One thought on “EduWiki Conference 2014”

This work is licensed under a Creative Commons Attribution 3.0 Unported License.